The starting point for my research was the text of the Weeks Act itself:

While the text of the Weeks Act did eventually inspire a song, it didn’t exactly tell a story…

To draw out a story, I based this comic on archival photographs from Plymouth State University’s online collection, “Protecting the Forests: The Weeks Act of 1911.”  These images tell a stark story of environmental collapse & conservation:

First, we see the arrival of the loggers in search of lumber:

This train ascends the Woodstock and Thornton Logging Railroad full of loggers, & descends full of logs:

… leaving behind a denuded, eroded hillside:

… floating logs down to the mills below:

Get LF&D COMICS in Print: 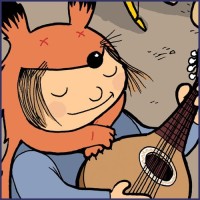