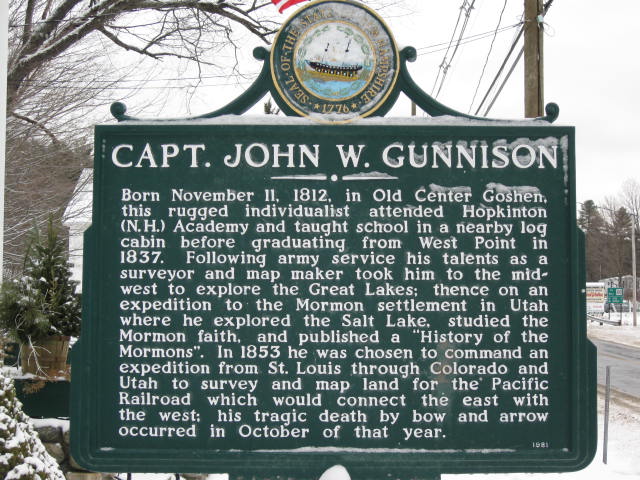 Upon first read this roadside marker‘s story seems almost straightforward.  But dig a little deeper… and I suspect there are potentially a couple of action-packed graphic novels hidden in here:

Like probably most “rugged individualist” log-cabin school teachers who go on to graduate second in their class at West Point, John Williams Gunnison seems to have been a bit of an intense fellow.   To read the accounts, the first few weeks of his ill-fated 1853 expedition were pleasant enough, but then things got tough.  Gunnison didn’t get along well with his comrades, and went against their advice and the advice of helpful Ute and Mormon hosts, and plunged headlong into dangerous territory. (The expedition botanist refers to Captain Gunnison derisively in his final journal entries before the massacre: “one is inclined to believe that this ass has lost his senses to lead us randomly through this unknown desert, which will probably lead us to misery….”)

The rest is history — or at least, Gunnison and his party soon were.

And did you notice the odd construction of this roadside marker’s final sentence?  Why doesn’t it just say “Indians killed him”?  Interestingly, Gunnison’s widow suspected that the Mormons were at least partly to blame for her husband’s death, based on some details and hints he’d mentioned in his letters!  Though this rumor was never proven, it does point to the attitudes and politics that made the area a potential powderkeg  in the years leading up to the Civil War…  As if in vengeance for the massacre, the local lake, river, and a town in Colorado were named Gunnison.  As it happens, there’s also a Gunnison Lake in Goshen.

<< I based the ambushing Paiute warriors on an 1850 photograph from a history of Ogden, Utah.

NEXT: Let’s look around at the town monuments… >>