1862: The Union armies stand at the gates of Richmond, and to the 2nd NH‘s Burleigh K. Jones, the war seems all but won.  He couldn’t be more wrong: 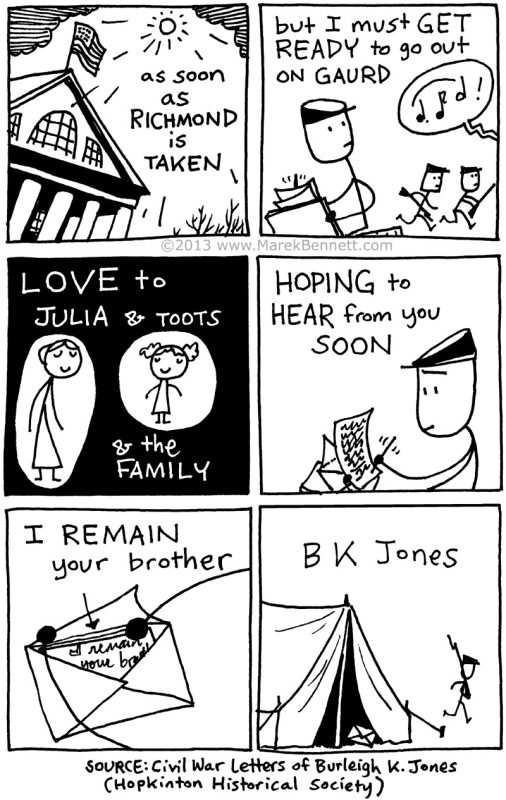 When I first read this passage, I mostly noted the further evidence of Burleigh’s entrepreneurial spirit as he tries his hand at barbering for his fellow soldiers.  Upon drawing it out as a comic, however, I became aware of the enormity of Burleigh’s miscalculation.  All through his letters of the 1850s, he lobbies his older brother Sullivan to find him a “place” (position, job), and ultimately joins Sullivan in Chicago to work at the historic Republican Convention of 1860.  Apparently Burleigh sees this stint with the 2nd NH outside Richmond as just another exciting passage on his way to his ultimate career — whatever that may turn out to be.  He’s not just predicting an imminent end of the war, he’s pledging himself to be ready by September for whatever comes next.

But in fact, by September 1862, the war will be far from over.  Lee’s army will be marching into the North, threatening Washington itself and dramatically turning the tides of the war.

Our author will not live to see that twist of fate; within less than two weeks from the date of this letter, Union armies will have begun their retreat from Richmond, and  Burleigh K. Jones will lie mortally wounded at the start of the Seven Days battles.