1863: Dr. Esther Hill Hawks confronts many of her own racial preconceptions when she finds herself managing the camp hospital that receives over 500 wounded men of the 54th Massachusetts Regiment following their assault on Fort Wagner… 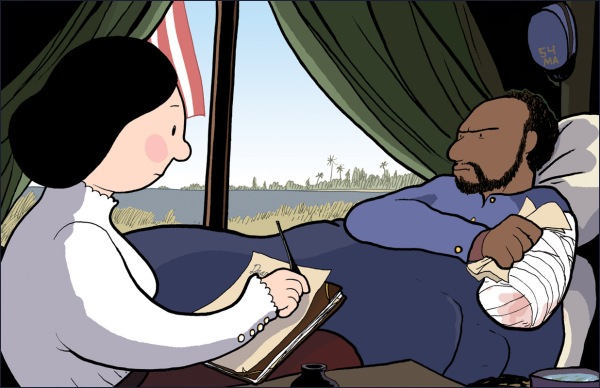 In previous entries from Dr. Hawks’ diaries, she refers to her freedmen students and patients in amusedly dismissive terms, describing them as “ignorant unformed children”.  Following her experiences treating the wounded soldiers of the 54th Massachusetts, she begins to refer to her patients as “men” who have earned her recognition of their humanity through their willingness to sacrifice everything — freedom, health, even life — to fight (in the words of one dying soldier) “not for my country, for I never had any, but to gain one”.  [RELATED COMICS TO BE POSTED…]