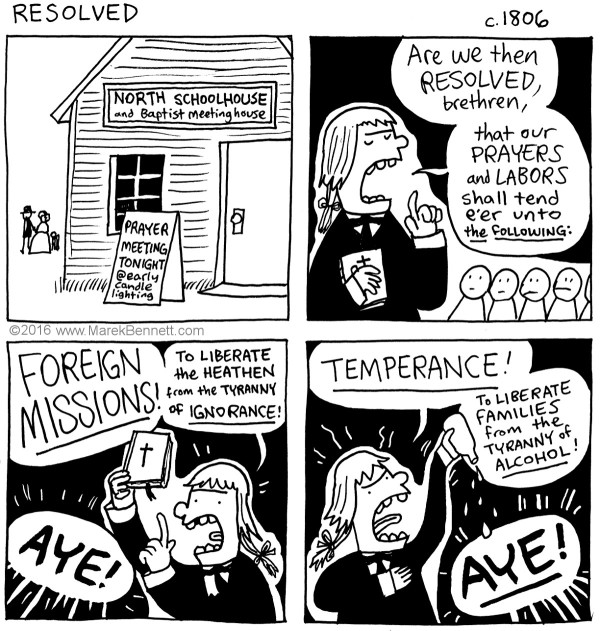 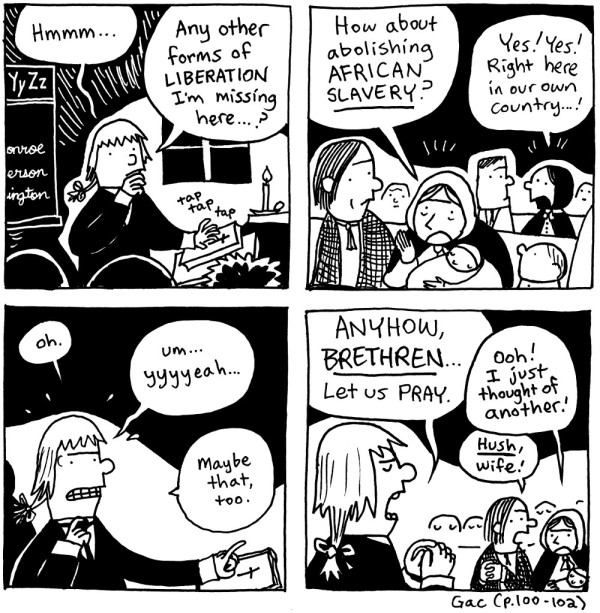 This episode is not an actual event from Hutchinson family lore; rather, it reconstructs some of the various currents in early 19th century NH church culture and reform activism, as articulated by Gac:

In the early 19th century, the Milford Baptists’ newfound compassion manifested in support for foreign and domestic missions to Christianize the unconverted, for temperance societies to stop drunkards from hurting themselves and their families, and even for antislavery to end slaving. (p.100)

In the dramatization above, we glimpse some of the reform movements that would so inspire the Hutchinson Family Singers in the coming decades — missionary work and temperance are well established in this new Baptist congregation, but Abolitionism (and the related movement for women’s rights) has yet to develop.  The exclusions and omissions portrayed represent a decline in egalitarianism with the new century, as Gac points out:

Colonial Baptists were far more sharing of church governance [between male and female members]… As a developing religious community, Baptists had adhered more to the egalitarianism embedded in their congregational practices as women had access to official avenues of power in the church.  But as the Baptist Church moved from the margins of American society toward widespread acceptance, women’s voices were increasingly silenced. (p.101)

Furthermore, we know the Hutchinsons were later involved in “Come Out” meetings, which implies their abolitionist views exceeded church leaders’ positions on slavery.

Early 19th century distinctions between religion and politics were not as they are today; according to our source:

In 1806, before the construction of a Baptist church in Milford, the schoolhouse in district two was built as a joint project between Baptists and the community.  For the next ten years the building was used as a school during the week and as a Baptist meetinghouse on weekends. (p.102-3)

For more on the connections between abolition & women’s independence, see the 1838 Sandwich Petition, which was widely circulated by local women… whether or not their husbands approved!